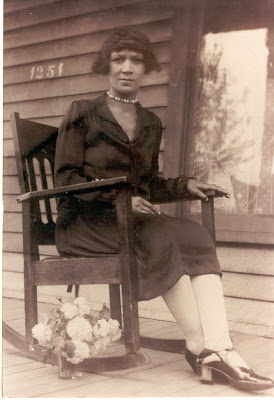 I'm a bit behind on the 52 Ancestors challenge so it's week four for me. Week four's prompt is invite to Dinner. Just the thought of inviting one of my ancestor's to dinner was exciting! I sat at the kitchen table, cup of coffee in hand and imagined what ancestor would sit in the chair across from me.  I chose my maternal great-grandmother,  Mary Belle Carr  as my dinner guest. Although my mother told me that she took care of me as a toddler, she died when I was three and I do not remember her at all. I've always heard so much about her.

I imagine that's it's a warm summer day in Iowa. When I came to the door she would say, in her southern drawl, "How are ya honey?" she would instruct me to put on an apron and snap those string beans as she prepared to fry the chicken. She had already made the potato salad along with her famous lemonade the day before so that they would be nice and cold. She had made plenty of biscuits earlier that morning, which were sitting on the table covered with a kitchen towel. The peach cobbler was bubbling in the oven filling the air with the smell of cinnamon and warm peaches. As I snapped the beans, I would ask her about her recipes and who taught her to cook. After dinner, we would sit on the porch, and I would ask more questions, like where her mother was from and when was she born. I would ask about her mother's family and what she knew of her father. I would ask if the family story was really true. Was her father really a German doctor?  Did he really take advantage of her mother? I would ask her how she came to Iowa before she married her husband Peter.

Mary Belle Carr was born May 27, 1886 in Lynchburg, Virginia to Nellie Goggins and James Carr. She had one brother, John W. Carr. She married Peter Doyle in 1903. It appears that she certainly had her share of hard times. She began having children very young and lost several children, some stillborn and some that died in infancy. One child died after another until about 1910. Out of thirteen children in total, seven lived. My grandmother always said that her mother, Mary Belle never worked a day in her life. Her husband Peter always cared for her and after he died in 1934, she had his pension. A "Widow's Pension" as grandma called it. I have yet to find this pension. She later became an evangelist. She preached the word of the gospel to the sick and shut in in the neighborhood. She would also visit women in prison. She re-married in 1940 to William Martin. She did not stay married for long. She died in 1966 in Des Moines, Iowa.
at February 10, 2018 No comments: