The Memories That Take Me Back Home 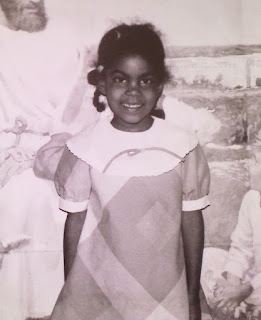 I found this picture of me as my mother and I were going through some of her old photos..Sunday school. It brought back a lot of great memories. I remember that dress. It was different shades of pink..I must of been 5 or 6 years old. I was standing in front of this great big picture on the wall in the hallway of the church.

As a child, I remember going to church and weekends at grandma's house. I think that's when I fell in love with getting all dressed up. I loved wearing pretty dresses along with my black patent leather shoes that shined. Gloves, lace tights or Bobbi socks and my little purse, Sunday was church day..it was family day. For a while my sister and I attended Forth Baptist Church Bible School. Mom didn't have a car so the bus would come and pick us up. I remember learning about Noah's Ark and the Ten Commandments. When we went to grandma's house for the weekend.. it was Church again. I still remember the gentle tap on my knee. Grandma would say, " Sit up straight, and pull your dress down..act like a lady".  She'd give me a lemon drop or piece of cinnamon gum. Next she'd give me the change to put in the collection plate,which I kept tightly clenched in my hand until it was time. I was always sad when it was time to go home on Sunday evening. I never wanted to leave grandma's house.

Sunday dinner was one of the best parts of the day. Whatever the occasion, family was there. Uncles,aunts,cousins..and food, there was so much food! Roast turkey and dressing, greens, macaroni and cheese, potato salad, raisin pie and some sort of  fruit cobbler...and ice cream, there was always ice cream. I remember that I hated potato salad. I always complained, saying that it didn't go together. "Who eats potato salad with turkey and dressing, I grumbled". Why not mashed potatoes and gravy?  clearly my opinion didn't matter. When I was growing up, you ate what you got and that was it. I had no choice in the matter. It makes me laugh thinking about those times. My mother later explained to me that it was a family tradition. Her grandmother made potato salad. In fact, many of the recipes that my grandmother made were the same recipes that her mother made. My mother also made the same recipes, the same way. Now I understood..cooking and recipes came from the ancestors, passed down through the generations, mother to daughter, grandmother to granddaughter. Now I get it.

Years later, grown and married with children of my own. There I was still going to church with my grandma. I loved spending  the weekend with her. Waking up to the smell of the roast turkey that she had put in the oven at the crack of dawn. I could hear the word of the gospel playing on the television that she listened to as she got dressed. As we sat in church, I'd smile to myself as she still tried to put  money in my hand for the collection plate like she did when I was a child. Maybe in her eyes I would always be her little granddaughter.

It's funny how life changes. I now make the same potato salad that I used to hate, as well as all the other recipes passed down. Grandma's no longer here. But I can still hear her say.  Always Thank God. Everyday. Thank him, Thank him and Thank him. 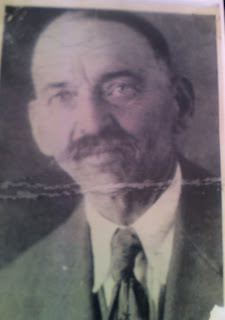 They Call My Name

Some days it seems like my ancestors call my name. On Different days, it's different ancestors. If  I look long enough , I swear I can see them standing there in the distance saying, "Keep looking chile' I'm right here in front of you" I had spent years searching for Mariah, my paternal Great Great-Grandmother. I could never get past the 1880 census, Just simply could not find her. Becoming frustrated with my research, I decided to put her away and focus on other ancestors.

Last summer this picture was shared at a family reunion. I was told that the woman in the photo was my great grandmother, Barbara Conaway. Although I was excited to see this wonderful photo. Something kept nudging me. Why did her clothes look so old?  I blew the photo up on my computer and searched every detail. I compared it to another picture of Grandma Barbara. They did not look like the same person. Grandma Barbara was born in 1881 and died in 1936. Something just didn't fit. The woman in the photo appears to have light eyes, her hair looks either gray or light brown.and of course, her clothes..I had a feeling that this is was not Barbara. A call to my cousin Ann confirmed my suspicion. The woman in the photo was definitely not Barbara. It was her mother. Mariah Hall Conaway.

After my conversation with cousin Ann, my curiosity sent me back to searching for Mariah and her family. Family oral history says that she was a slave in Franklin county, Missouri. I had already found Mariah's mother, Myra Hall, and her siblings in the 1870 census. The same record that I had searched a dozen or more times. I felt sure that Mariah and her husband Curry had to be in Franklin County somewhere. There was something that I was missing. I got a tip about a research strategy for finding your African American ancestors in the 1870 census called the "Nettie Rule". After reading this article by Tony Burroughs,  Finding African Americans On The 1870 Census  I knew that I had to try again.

I went back and  searched the 1870 census again, going back over the same census record that I had previously found Mariah's mother and siblings listed on, only this time I payed very close attention first names as well as surnames. Suddenly there, sitting at the very bottom of the page, living a few doors away form her mother and siblings, was  Mariah, Curry and their young son, Joseph. Only their surname was not Conaway. It was HUNTER! I could not believe it. How in the world did I miss this!  I never noticed them. I always focused on the surnames. I guess that's why I missed them. Obviously they had changed their name, as many slaves did after they were free. Next, I began searching for the Hunter surname in Franklin County, Missouri to see what I could find. 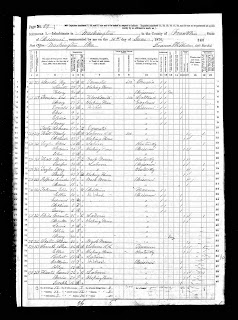 I found a will for a man named VALENTINE HUNTER. Valentine was a slave holder from Rowen County, North Carolina. He moved to Franklin co, Missouri with his wife Margaret in about 1826 bringing his slaves with him.  In 1849 he left a will  freeing his 13 slaves. Easter/Esther, Nice, Caroline, Curry, John, George, Smith, Mary, Ambrose, Charles, Manda/Amanda, Clinton, Sarah Ann. Could this be my Great Great Grandfather, Curry? Valentine also put in his will that after the death of his wife, Margaret, that his property be sold and the money from his estate be divided among his slaves. Did they actually receive the money? According to documents in the Missouri State Archives. All former slaves actually did receive the money that Valentine wanted them to have. I wondered..Why he would free his slaves in 1849?  Even more, why would he leave his former slaves money from his estate. Many of the slaves were young children and were entrusted to the care of some of the older slaves. 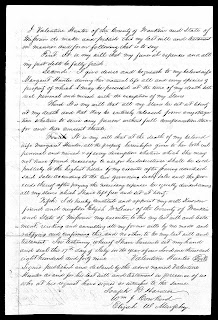 I searched for Curry with this new found name, Hunter. I found him in 1860 living as a free man in Franklin county. He was living with a mulatto woman named Maria Ferguson. I wonder if this woman could be Mariah. So many questions.. who knows, maybe this is my link to all my DNA matches with ancestors from Rowan county, North Carolina and the Hunter and Ferguson surnames. My search continues..