Who Was Uncle Johnny?

I remember my mother talking about her Uncle Johnny. He was a Chauffeur, had loads of money, and always bought her a big can of baked beans each time he came to visit. The part about the baked beans always made me laugh..I told my mother how odd it was, most children would rather have candy instead of beans. She said that uncle Johnny knew how much she loved baked beans. So he always made sure to bring her some. I thought it was very sweet that her uncle thought of her.

As my mother shared her personal memories of  Uncle Johnny, her mother, Grandma Margaret did the same. It was interesting to hear them both talk about this man who obviously meant a lot to them both. Listening to these personal recollections left me feeling like I knew him personally.

Uncle Johnny, John Wesley Carr, was the brother of my maternal Great-Grandmother, Mary Belle Carr Doyle. He came to St.Paul,  Minnesota about 1920 from Lynchburg,Virginia. For many years, he lived  on Portland avenue in the home of his employer, Sherman Finch. John was the family's Chauffeur for 25 years. My Grandmother, who lived a few blocks away, often spoke of the Finch family, and the beautiful mansion they lived in. Uncle Johnny came for dinner weekly. Alway's with a can of baked beans in hand for my mother. He was a member of the Sterling Club, a social club in St. Paul in the Rondo neighborhood.  He went fishing and hunting often with his friends. After many years of driving he started having trouble with his legs. He also was the custodian at the Minnesota State Capitol for many years. John married Susan Sten in about 1938. Susan was from Germany. As far as I know, they never had any children. I don't think that they were married long. I have not been able to find any information about Susan.

According to my grandmother, Uncle Johnny had more money than he knew what to do with. Much of it he spent on his friends. I started wondering how he acquired his wealth. Just how much did a Chauffeur make in the years 1920 to 1935? How much did a custodian make?  maybe he worked both jobs at the same time. My mother nor my grandmother never really said how he acquired his wealth. I don't think they really knew.

Uncle Johnny was later admitted to Hastings State Hospital  where he died in 1959.  A year after his death, an article was posted in the newspaper stating that he had left an estate of  $35,385 that was being held for his sister, Great-Grandma Mary. My grandmother said that eventually, all his estate went to his fishing buddies.


Questions:
1.How and why was his estate left to his friends instead of his sister?
2.Where did his money come from?
3.Did he have a will? 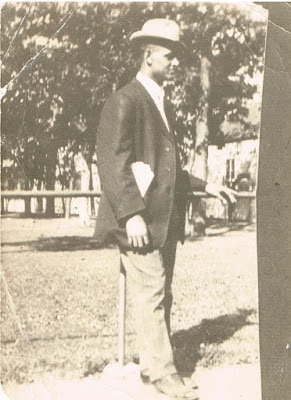